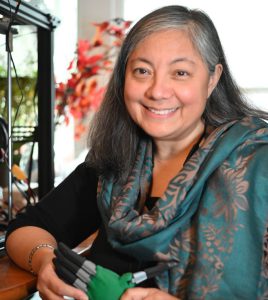 Peter Binkley – e-NABLE educator and designer. He and his son, Peregrine Hawthorn, designed the Talon Hand, the Ody Hand, the Flextensor, and the Osprey Hand, and were collaborators on e-NABLE’s Raptor Hand design team. Peter leads the exoskeleton workgroup and shared his unique upper limb exoskeleton design with the community in December 2017.

Janet Fofang – APBLS field coordinator. She is an electrical engineer, co-founder of the Tassah Academy and a WeTech Africa Leadership council member. She has been teaching at the College D’enseignement Technique Industriel et Commercial for 16 years.

Christian Silva – Founder, Give Me Five in Bogota, Columbia. Silva does arm, hand and lower limb research, including e-NABLE Myoelectic designs. He is the designer of the Promimetic devices.

Ladi Goc – iMADE3D founder and designer, and a founder of the workforce skills transition program in e-NABLE

Ed Choi – a founder of e-NABLE Sierra Leone, working with e-NABLE Hong Kong on a version of the Gripper arm and hand

Special thanks to Michael Raphael and Mike Agronin of Direct Dimensions for their support, training, introduction to 3D scanning, and creation of instructions for the Raptor in 2014. Your generous assistance has resulted in countless devices created and gifted, and persists as a strong starting point for many activities and innovations. It is still bedrock for our feet.